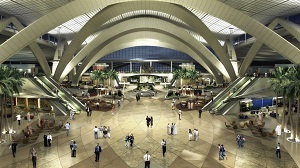 The passenger traffic and aircraft movements both have witnessed an increased at the Abu Dhabi International Airport in the month of April, 2014.

The passenger traffic rose to 22.5% in that month as compared to the same period last year, according to the latest figures.

Ahmad Al Haddabi, Chief Operations Officer at Abu Dhabi Airports, commented on the significant increase saying: “Today Abu Dhabi International Airport caters to more than 40 international airlines connecting the U.A.E. s capital with more than 96 destinations in over 54 countries globally. This is as a result of Etihad s growth strategy, evident in new routes to be served this summer including non-stop flights from Abu Dhabi to Los Angeles in the USA, Zurich in Switzerland, Belgrade in Serbia, Perth in Australia, Jaipur in India and Yerevan in Armenia. Abu Dhabi International Airport will also see more flights from its other airline partners this summer, especially in the Gulf region in Saudi Arabia, Qatar and Bahrain. Additionally, more aircraft will fly to Pakistan with extra flights to Lahore, Islamabad, Karachi, Peshawar and Rahim Yar Khan. Similarly, Hyderabad, Chennai and Bangalore will each witness 14 extra flights a week from Abu Dhabi – the greatest growth in the Indian market.” “Abu Dhabi Airports is on track to handle this significant increase in air traffic through the upgrade and expansion of our facilities, exciting new retail offerings, and integration of services to ensure a world class travel experience for passengers. We are looking forward to a busy summer programme.” Abu Dhabi Airports has implemented a Capacity Enhancement Programme with several key infrastructure projects already delivered, with more in the pipeline.