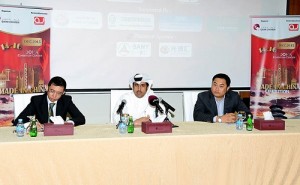 On the sidelines of the “Made in China” Expo, which was opened Tuesday by HE Dr. Mohamed bin Saleh Al Sada, Minister of Energy and Industry, the Qatari-Chinese trade forum was held at the Doha Exhibion and Conventions Center(DECC).

Tian Guofeng, China International Center for Economic &Technical Exchanges Ministry of Commerce , and Cui Bin , Head of the Economic and Commercial Office of the Embassy od China to Qatar were also present.

Addressing the forum, Saleh Hamad Al Sharqi said that the Qatari business community and businessmen are astonishingly impressed by the economic growth and hub achieved by China.

He expressed thanking to all exhibitors, saying: “We are honored in Qatar Chamber to organize this exhibition for the first time in the State” Al Sharqi praised open and stable economic actions pursued by the Government for achieving the comprehensive sustainable development for its citizens.

China is a friendly country to Arab countries and to Qatar, he added assuring that this expo reflects the Chamber’s keenness on developing further communication channels among Qatari businessmen and their Chinese counterparts. It’s a good opportunity for discussion and exchange experience in technology, infrastructure and construction spheres.

The exhibition attracted lots of businessmen during the second day who are interested in the these sections, wishing it witnesses genuine partnerships and new firms that benefit both countries economics.

For his part, Chen Hongzhan paid tribute to Qatar Chamber efforts in organizing this expo . He gave a presentation about Foshan’s investment environment ,business opportunities and economic development situation.

Foshan is the epicenter of Guangdong’s high-end manufacturing industries. It is known as the city of ceramics capital of the world .It facilitates the upgrading of the traditional manufacturing and supports the development of emerging industries: Equipment & Machinery manufacturing , home appliances, advanced ceramics and new material, material processing and products, textiles and apparel , electronic information, food and beverage, fine chemicals and pharmaceuticals and energy vehicles.

Hongzhan noted that the city has excellent business environment and complete urban facilities. It provides a platform of 500 companies and slew of international companies.

Cui Bin praised the Chamber’s initiative to organize the exhibition affirming it will contribute to creating mutual cooperation between Qatari and Chinese companies. The bilateral trade volume between Qatar and China has increased from 400 million USD IN 2004 TO 10.6 billion in 2014 .

Qatar has become one of China’s most important business partners in the Middle East and Gulf region , he said, adding:” Qatar is still expanding the project investment to fulfill the national vision 2030 and to host FIFA 2022 World Cup , there will be more opportunities for China Qatar cooperation” Tian Guofeng invited Qataris to visit China to explore business and investment opportunities and to tour Chinese factories .

Saleh Al Sharqi welcomed this invitation saying that Qatar Chamber will coordinate with the Embassy for organizing a Qatari businessmen delegation to China for attracting Chinese investments to Qatar and to explore the available ones there.