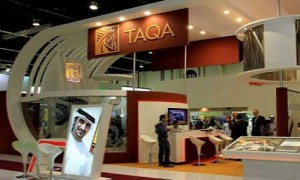 TAQA, the international energy and water company from Abu Dhabi, today announced its net profit after minority interests grew by 158 per cent to AED 274 million in the first quarter in the quarter for 2014, due to a recovery in UK North Sea oil output, stronger natural gas prices in North America and higher technical availability in the international power fleet. TAQA profits up 108 per cent in Q1 for 2014.

Total revenues rose 34 per cent to AED 7.3 billion, while underlying revenues, excluding passed through costs, were up by 39 per cent to AED 5.9 billion.Hydrocarbon production in the UK North Sea increased by 118per cent to 62.9 thousand barrels of oil equivalent a day (mboed), thanks to a restoration of production of the Cormorant Alpha platform in the UK North Sea, the integration of new assets in the central North Sea and a successful drilling programme at North Cormorant.

In North America, oil and gas production was stable despite the lower capital expenditure environment while net realised prices were up by 22per cent. In addition to greater capital efficiency, the company’s efforts to reduce costs yielded results as unit operating costs fell by 12 per cent.

Global power production saw an improvement year on year, with 13,482 GWh generated during the period and underlying revenue up 6per cent at AED 2.0 billion. The international fleet in particular performed well, with technical availability returning to normal levels after a series of outages in the comparable period last year.

There was slightly lower technical availability in the domestic market following forced outages at the Fujairah 1 and 2 and Umm Al Nar power stations.EBITDA for the first quarter of 2014 grew by 50per cent to AED 4.1 billion, and net profit rose by 158 per cent to AED 274 million, reflecting the higher revenue and EBITDA.

Available liquidity stood at AED 14.9 billion, including AED 4.2 billion of cash on hand. In April, the company refinanced USD 1.2 billion of bonds that were due to mature in September 2014.

Growth projects showed significant progress, with the first of two new 350 MW units at the Jorf Lasfar power station in Morocco commissioned in April. The second unit is expected to be commissioned in June and will expand the facility’s output to 2,056 MW. TAQA also made good progress with the expansion of the Takoradi 2 power station in Ghana, achieving 85per cent completion.

In March, the company announced the acquisition of a 51per cent stake in two hydroelectric plants in the northern Indian state of Himachal Pradesh. The plants have a combined power generation capacity of 1,391 MW. This acquisition is expected to complete at the end of the year.

Gas Storage Bergermeer in the Netherlands started preliminary commercial operations in April. When complete in 2015, Bergermeer will become the largest third party access gas storage facility in Europe. TAQA has sold all of the facility’s long-term capacity and plans to auction the remaining short-term capacity in September 2014.

The Atrush field development plan is proceeding on schedule in the Kurdistan region of Iraq, with first oil expected in 2015.

Edward LaFehr, Chief Operating Officer, said, “We are focusing on operational excellence and driving performance, and the results of the first quarter show we are moving in the right direction.”

Stephen Kersley, Chief Financial Officer, said, “Our first quarter result was helped by the restoration of North Sea oil production at Cormorant Alpha and higher natural gas prices in North America, but we also demonstrated our ability to increase capital efficiency and control costs. We are well positioned with ample liquidity, and look forward to driving continued improvement in earnings and coverage ratios.”