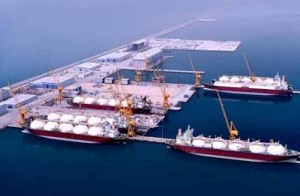 Qatari Marine Transport Company (Nakilat)announced that it has taken over the full ship management and operations of its first liquefied natural gas (LNG) vessel, the QFlex type (Al-Hamla), from OSG Ship Management – UK Limited. The planned takeover is the first in a series that will include three other vessels within the next two months, said Nakilat in a press release Saturday. HE Minister of Energy and Industry and Chairman of Nakilat Dr. Mohamed bin Saleh Al-Sada officially initiated the takeover of the technical ship management of the first LNG vessel in Nakilat’s fleet via video conference call. HE Dr. Al-Sada told the captain, officers, and crew on board (Al-Hamla), as well as Nakilat staff, that this was a historic day for the company. “This great achievement against a fast and challenging timeline, could not have been possible without the hard work and the dedication of everyone in Nakilat, the OSG office in Newcastle, and onboard the vessels,” he said. “At Nakilat, we hold great pride in our mission and vision of being the world’s leading owner and operator of vessels for the transportation of liquefied natural gas and associated products,” he added. Dr. Al-Sada urged everyone to meet the highest of safety standards, and to ensure the full use of the onboard Safety Management Systems, saying “We enjoy a remarkable safety track record and we aim at the highest safety standards within the industry.”
Nakilat’s Managing Director Eng. Abdullah Fadhalah Al-Sulaiti also congratulated Nakilat’s staff and the ship’s officers and crew on this remarkable achievement. He said this was a significant milestone in Nakilat’s evolution center stage in the shipping world.

The Captain of Al-Hamla thanked HE Dr. Al-Sada on behalf of the ship’s crew for welcoming them to the Nakilat family.
The statement said that with a cargo capacity of 216,000m3 Al Hamla is owned 50.1 per cent by Nakilat and 49.9 per cent by OSG. The vessel was built in South Korea by Samsung Heavy Industries and was delivered in February 2008. Al Hamla is in active service for charterer Qatargas II and has completed delivery of 45 cargoes worldwide.

Nakilat intends to continue with its objective of taking over ship management responsibilities of more LNG vessels as part of its long term strategic vision, plan and growth.
Nakilat is a Qatari marine transport company providing the essential transportation link in the State of Qatar’s LNG supply chain. Its LNG shipping fleet is the largest in the world, comprising 61 LNG vessels.