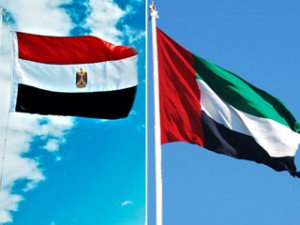 Suhail bin Mohammed Faraj Faris Al Mazrouei, Minister of Energy, and Ihab Imam Hamouda, Ambassador of Egypt to the U.A.E., have discussed bilateral relations between the U.A.E. and Egypt and joint cooperation, progress and development in many areas, especially in the energy sector, and ways to support and develop these relations for the service of common interests.

During the meeting, Al Mazrouei praised the deeply fraternal relations that bind the U.A.E. and Egypt. He stressed the keenness of the wise leadership to support this historical relationship and consolidation in various fields, especially in the field of energy, and serve the common interests of the two countries.

He expressed his wishes to see Egypt make further development and progress in the next phase of growth, and achieve stability and security, pushing the pace of work and economic development forward.

For his part, the Egyptian Ambassador stressed that the U.A.E. plays a vital role by supporting pioneering investments in Egypt, and expressed his thanks and appreciation to the wise leadership of the U.A.E. for its support for the great achievements of further progress and stability.

He praised the important role of the U.A.E. on the international map in the fields of economic, trade and investment and energy.

Hamouda expressed his country’s aspirations to move towards more cooperation and exchange of expertise to establish the bonds of this relationship and its historical development.