During the meeting, they reviewed joint cooperation and ways to develop it. They also exchanged views on a number of issues related to oil and gas industry as well as the latest developments in the global oil market.

Sheikh Hamdan hailed the initiatives and projects implemented by Total United Arab Emirates in the country, especially in the oil, gas, renewable energy, supporting Emiratisation and developing skills of UAE citizens. He also praised the company’s role in preserving environment and continuous social initiatives in the educational, training, cultural and sports domains. 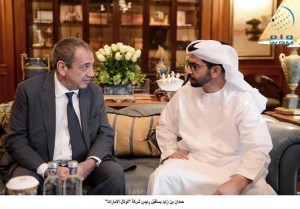 On his part, Nuseibeh underscored the importance of the UAE for the whole world in the field of oil, gas and renewable energy as it ranks first among the regions for Total. He also affirmed that the company has been operating in the country since 1939.

He added that Total is very keen on continuing its pioneering role aimed at contributing towards developing the local society through transferring the best devised technologies in the field of oil, gas and energy industry.

A number of officials attended the meeting.