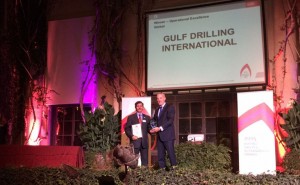 Gulf Drilling International Limited (GDI) has been selected the global winner of the DuPont Operational Excellence Award for maximizing efficiency and safety in new rigs.

DuPont has announced the winners of the 12th edition of the DuPont Safety and Sustainability Awards during a ceremony held recently in Wilmington in the US state of Delaware.

The awards recognize outstanding initiatives aimed at enhancing workplace safety, sustainability and operational effectiveness.The award ceremony was accompanied by a Best Practice Forum, in which the winners shared the context, content and success factors for their projects.

The first edition of the DuPont Safety Awards was launched in 2002 with the purpose of stimulating individual or collective initiatives for safety enhancement and accident prevention, in the EMEA region.