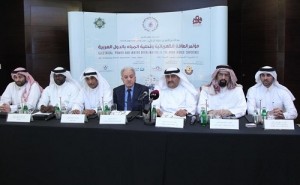 Under the patronage of HE Prime Minister and Minister of Interior Sheikh Abdullah bin Nasser bin Khalifa Al-Thani, Qatar Society of Engineers, in cooperation with the Ministry of Energy and Industry and the Federation of Arab Engineers, will organize electric power and water desalination conference in the Arab countries in Doha from 22 to 23 February, 2016.
The conference, which will be held under the slogan ‘power sources and water desalination in the Arab countries’, is also organized in collaboration with Qatar General Electricity and Water Corporation, Qatar Petroleum and Qatar Electricity and Water Company.
Qatar Society of Engineers (QSE) Chairman Ahmed Jassim Al Jolo said that the conference will address one of the key challenges faced by the Arab countries which are undergoing rapid development and increasing demand for electricity and water.
Addressing a press conference held today to announce the details of the conference, Al Jolo said the continued depletion of natural resources for water and electricity generation underlines the need for the diversification of energy and water resources, adding that the Arab states need to focus on knowledge and skills in addition to human and financial resources necessary to diversify energy and water resources.
The conference is an opportunity for discussion on these issues on which comprehensive studies should be conducted to highlight the importance of those sources and other sources such as nuclear energy and solar energy, he added.
For his part, General Secretary of Federation of Arab Engineers Dr Adel Al Hadithi said that the Federation includes 18 subsidiary bodies representing 18 Arab countries in various engineering disciplines, adding that the participation of the Federation stems from its interest in the issues to be discussed in the conference.
He hoped to see a large local and Arab participation in the conference, pointing out that the preparatory committee of the conference made a great effort to prepare for it well.
Engineer Abdullah Mohammed Al Bakr, deputy head of the conference, said that they have received 12 working papers to be presented during the conference, including three papers from the State of Qatar. He pointed out that they are still waiting for more research papers, expecting that the number to be presented during the conference will reach 18 working papers.