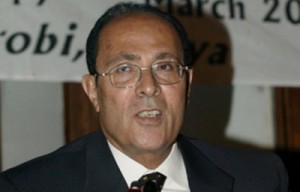 Dr. Mahmoud Abu-Zeid, the President of the Arab Water Council

HE the President of the Arab Water Council Dr. Mahmoud Abu-Zeid said that the Arab world, which makes up less than 5% of the world population, has only 1% of the total available water resources in the world.
Speaking at the Second Arab Water Conference which kicked off today in Doha, Abu-Zeid said that the Arab world is one of the driest regions in the world, adding that the gap between available water and water demand is on the rise.

He stressed the importance of the Second Arab Water Conference, saying it offers opportunities for cooperating in issues of water that have become a matter of concern for the Arab countries and the entire world.
He added that the statistics indicated that 18 out of the 22 Arab countries suffer from water scarcity, adding that the challenges have been increasing due to the negative impacts of worsening climate change phenomenon, global warming and rising annual rates of temperature associated with those changes.

He noted to the increasing demand of freshwater sources, saying the ground-water basins are exposed to exhaustion in a set of countries as a result of the tremendous growth in population, the expansion of major cities and urban areas as well as the increase of industrial and agricultural activities.