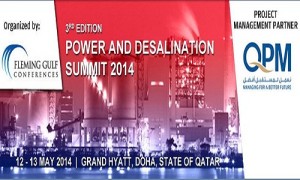 Activities of the 3rd annual Power & Desalination Summit kicked off in Doha city on Monday and is to run for two days.
The summit organised by ‘Fleming Gulf’ will discuss the challenges and opportunities facing the use of water and sustainable energy. A host of officials from across the country participated in the summit organized by Fleming Gulf.
Managing Director of Ras Laffan Power Company (RLPC) Mubarak Nasser al Nasr said in a speech during the summit that the world today is facing a huge challenge in providing water and electricity. Around 35% of the world’s population have no sufficient access to drinking water, while a quarter of the world’s population have no access to electricity.
Al Nasr said water scarcity in the GCC posed a different challenge all together, due to the limited fresh water resources in the area. This led to a dependency on desalinization as a solution to water scarcity. In turn, this puts a huge demand for hydrocarbon energy which fortunately the area is rich with. However, Al Nasr added, growing demand for power and water has become so great that it has started hurting the GCC countries’ economies and creating a new challenge to face water scarcity. Other challenges to take into consideration are the environmental impact and affordability.
Al Nasr said that Qatar has gone through a serious of transitions to overcome the challenges he mentioned at the beginning of the speech. For example in the early 90s, the electricity and water sector had its own ministry. In 1996, the government decided to implement reforms that saw the birth of Qatar Electricity & Water Company. It was charged with building, operating and maintaining the country’s power and water plants.
With the new millennium came a new corporation, Kahramaa which was charged with the transmission and distribution of power and water in the country. Then the country established a year later the first potable water plant.
Last year, a new international company called Nebras Power was established to invest in the energy and water sectors outside the state of Qatar. It has a capital of $1 billion.
Managing Director of Ras Laffan Power Company said that these transitions were vital in meeting the country’s tremendous demand for water and electricity. He reviewed the growth of demand first in water to reveal that it has grown by 138% in six years. Demand for water in 1997 was 61 MIGD. Some 10 years later it has jumped to 138 MIGD. Last year demand soared to 328 MIGD.
As for electricity, demand has grown by 57% in the last five years alone. In 1997, Qatar used 961 MW. Some 10 years later the figure was a massive 3990 MW. The figure almost doubled by 2012, when demand reached 6255 MW.
Qatar has become one of the fastest growing economies in the world and managed to double its nominal GDP three times since 2005. That economic progress has in turn meant that demand for power and water will increase in the future, especially that the population is likely to increase eightfold by 2050.
He added that the electricity and water sector was facing many challenges nowadays, stressing that he hoped the summit will help lay out a plan to face these challenges.
Some of the challenges are reducing the environmental footprint, improving efficiency, determining the prospects of renewable energy, discussing the technical challenges facing desalination plants and issues related to monitoring the quality of drinking water, he concluded.