The Saudi Arabian government awarded $22.5 billion in contracts to three foreign-led consortia on Sunday for the design and construction of a metro rail system in the capital Riyadh. 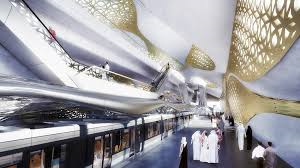 Design work will start immediately and construction will begin in the first quarter of 2014, the government said. The project would be completed in 2019.

Flush with cash after more than two years of high oil prices, Saudi Arabia is pumping billions of dollars into infrastructure projects designed to improve living standards and ease social discontent in the wake of the 2011 uprisings elsewhere in the Arab world.

Last August the government approved a $16.5 billion plan to modernize the transport system in its holy city of Mecca, including building a bus network and a metro system.

It is also building several other rail systems, including a 2,750 km line running from Riyadh to near the northern border with Jordan.

Saudi officials said Riyadh’s population was projected to grow from 6 million to over 8 million in the next 10 years, making the metro vital to ease congestion and pollution in the capital’s streets.

In addition to raising living standards, the government says it wants to upgrade the country’s infrastructure to help the economy diversify beyond oil, making it less vulnerable to any future plunge of global oil prices.