HE Minister of Municipality Checks Progress of Two Major Projects 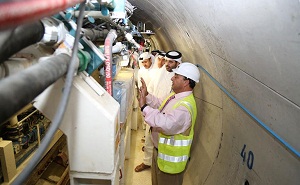 HE Minister of Municipality and Urban Planning Sheikh Abdul Rahman bin Khalifa Al -Thani paid Tuesday a field visit to Mesaimeer tunnel for surface and ground water and Lusail Expressway. Both projects are being executed by Ashghal Authority.

The visit began with the Lusail Expressway project given its importance. The project involves develops the arch roundabout and its Northern exit to link Doha with Lusail city. The expressway has three main intersections that lead to Katara, Pearl and the Diplomatic Area. Work on the 5.3km-long road began in the third quarter of 2012. Work is expected to conclude on the second quarter of 2017. The project also includes establishing a tunnel for light rail.

Ashghal made a new achievement in terms of safety. The authority’s work safety plan allowed to go for 10 million hours with no injuries that led to stopping work, in the period ending in June 2014.

HE the Minister then visited the site of the Mesaimeer tunnel for surface and ground water. It is considered one of the main projects that Ashghal is carrying out to develop drainage systems to deal with surface water across coming from sub-networks covering around 170 km. Work on the 9.7 km tunnel is scheduled to conclude in the first quarter of 2017 HE the Minister expressed his satisfaction with how work has been progressing in both projects.

His Excellency called on work teams of both projects to intensify their efforts in the coming period.