The Dubai Duty Free Foundation, in partnership with Gawad Kalinga, a Philippine-based poverty alleviation and nation-building movement, has officially opened the Dubai Duty Free GK Village. The ceremony saw the operation hand over ownership of 32 houses to Typhoon Haiyan survivors in Binotong, in the province of Leyte in the Philippines.

Following the strongest typhoon that hit the country in November 2013, Dubai Duty Free, with various efforts from foreign governments and international agencies, reached out to Gawad Kalinga to be a part of the rebuilding programme for those who survived the onslaught of the typhoon by providing them with more typhoon-resilient homes. 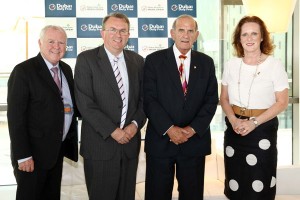 Commenting on the official handover, Dubai Duty Free Executive Vice Chairman, Colm McLoughlin, said, “We are deeply honoured to open the Dubai Duty Free GK Village for those who were victims of typhoon Haiyan and were left homeless.

Today’s ceremonial handover of the symbolic key to these houses affirms Dubai Duty Free, through our Foundation and through our staff initiatives, as a supporter of the noble and humanitarian goal of delivering rehabilitation assistance to people affected by natural disasters in the Philippines.”

“The beauty of this project has been that the local people get to participate in the rebuilding process, which makes it more meaningful to the families who can see that their personal investment of hard work has created their new home. My thanks to our management and staff who have contributed towards the funding process along with our foundation.” added Mr. McLoughlin.

The Dubai Duty Free Foundation has supported many charitable initiatives affected by natural disasters, including the rebuilding of Palliyawatta Village in Sri Lanka following the tragedy of the 2004 tsunami. In 2014, the operation also supported the industry-based charity, Hand in Hand for Haiti, which saw the opening of a US$1.5 million Dubai Duty Free Sports Complex.