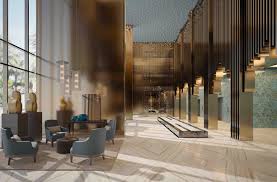 The contract has been awarded for the construction of a luxury serviced apartments tower in the golden strip on King Fahad Road in Riyadh, the Saudi capital, interiorly designed by the Italian brand FENDI Casa.

“DAMAC Properties is thrilled to be working with Biladin group on the construction of DAMAC Esclusiva which will take the standards of luxury home living in the Middle East to a new level,” said Niall McLoughlin Senior Vice President at DAMAC Properties.

“Together we can bring an experience to the market which the region is yet to see. It is a perfect synergy between two visionary companies looking to reach the pinnacle of luxury living.”

“DAMAC Esclusiva Luxury Serviced Apartments in Riyadh are being made available by invitation and pre-approval to a limited number of VIP’s only, reflecting the quality and refinement on offer. We believe these will be the most desirable serviced apartments available anywhere in the Middle East,” he added.

DAMAC Properties announced its major regional strategic tie-up with luxury global brand FENDI in February, to provide interior designs on projects in Riyadh in the Kingdom of Saudi Arabia and Dubai, UAE.

The two companies will also partner on the interiors for exclusive private apartments in DAMAC Residenze in the Dubai Marina.

The concept of continuity between building and interior space guides the venture between the two luxury giants. The project is not only furnished with distinctive pieces from the FENDI Casa collection: the whole of the interior design is conceived by FENDI.

The state-of-the-art project, which has already reached the first typical residential level after finishing the four podium levels is set to be completed in 2016 and shall provide the highest standards of refinement.

DAMAC Esclusiva Luxury Serviced Apartments has a specific and distinct identity. A subtle dialogue with the surrounding place makes the local atmosphere, culture and climate immediately palpable. The tower is designed as a contemporary FENDI space inspired by Oriental tradition. The project will be managed by DAMAC’s own Hospitality division, DAMAC Maison, a five-star hotel and personal service Management Company to provide the levels of luxury expected of VIP residents.

Whilst operating the serviced apartments within DAMAC Esclusiva, DAMAC Properties will offer owners the personal touch of a VIP luxury 24/7 service, while investors will also be able to benefit from an attractive return on their apartment in the months they do not reside through a rental pool programme.

Each apartment will be fully designed by FENDI Casa reflecting the authenticity, desirability and uniqueness so strongly associated with FENDI. The reception and lobby areas of both the towers will also be styled by the FENDI Casa team to create a luxurious experience from the moment guest’s step inside.

The common areas of the tower are designed to the highest standards of finishing and decor and include relaxing luxurious spa and swimming pools, gymnasiums, restaurants and cafes.