DAMAC Properties has awarded a 1 billion AED contract to TAV Tepe Akfen Investment construction & operations – Dubai Branch. This is the main construction contract on its newly launched project “DAMAC Towers by Paramount”, a luxury hotel and serviced residences in the Burj Area of Dubai”. 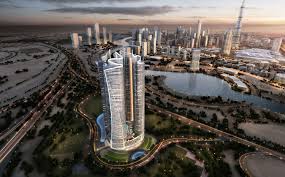 Enabling work has been completed on site & it is ready for the main contractor to start the construction work. The duration of the contract with TAV is 33 months & the value of this contract is 1,059,000,000,00 AED which is the largest single contract DAMAC Properties has awarded.

The four towers which make up ‘DAMAC Towers by Paramount’ are brought together with a multi level plaza, offering an eclectic selection of themed food & beverage concepts, meeting & events facilities, a screening room, wellness & fitness centres, swimming pools, kids club, retail, and merchandise all featuring the Paramount brand or select partner brands. Each tower stretches over 250 metres into the air.

One tower will comprise of the Paramount Hotel with the remaining three towers, housing the DAMAC Maison – Paramount co-branded serviced Hotel Residences. Developed by DAMAC Properties, the region’s leading luxury private developer, in collaboration  with Paramount Hotel & Resorts (PHR-FZ-LLC), the project offers an ambience and reflection of the Hollywood glamour and California cool lifestyle, synonymous with Paramount Pictures over the past 101 years.

“We are absolutely delighted to be selected by DAMAC Properties to build this project in Dubai, the DAMAC Towers by Paramount. DAMAC Properties is one of the leading developers of this region and is renowned for the high-end landmark projects that add significant values to the cities they belong. With the level of quality of our work as well as our expertise in building towers, TAV Construction is the right fit for realizing such a demanding project. This project will redefine luxury and with its distinguished architecture will mark the stunning skyline of Dubai.” Said Yusuf Akcayoglu – Middle East Director, TAV Construction.

‘DAMAC Towers by Paramount’, will provide enviable views of the world tallest tower, the Burj Khalifa and provide easy access to one of the world’s largest shopping malls, The Dubai Mall.

This area welcomed more than 65 million visitors in 2012, an increase of over 20 percent compared to 2011. The number is more than the amount of annual tourists to New York City (52 million).

According to the latest Middle East Hotel Benchmark Survey produced by professional services firm Ernst & Young, average room rates in Dubai have jumped from US$292 to US$314 in April 2013, compared to the same period last year.

According to the latest report from Knight Frank, an independent global residential and commercial property consultancy, rents in Dubai had increased by 18.3% in the year to March 2013. The Knight Frank Prime Global Rental Index stated that rents in prime areas in developing cities are driving the market, with traditional powerhouses such as Hong Kong, London and New York falling well behind.

HSBC bank in its latest report indicated that Non-oil business activity in the United Arab Emirates increased in July, underpinned by new orders from abroad, a sign that the UAE economy remains in good health even as other emerging markets wobble.

Dubai’s property valuations is  experiencing strong growth with Asteco stating that valuations across the Emirate have grown 12% in the second quarter of 2013 alone and by 38% compared to Q2 2012.