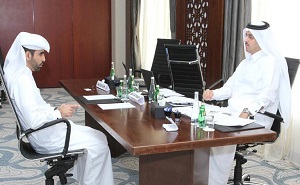 As part of its efforts to expand and enhance its workforce, the Public Works Authority (Ashghal) organised an open recruitment day in Qatar, offering career opportunities in roads and drainage operations and maintenance. The recruitment day was attended by a large number of qualified professionals from Qatar and overseas including civil, electrical and mechanical engineers.
Ashghal’s Human Resources Manager Saif Al-Kaabi said that the Authority is currently implementing a wide range of nationwide infrastructure and public buildings projects to develop Qatar into one of the most structurally advanced countries in the world. To deliver on its mandate, Ashghal is seeking to recruit leading talent and expertise particularly in the fields of engineering and technology.
Al-Kaabi added that due to the expansion of Ashghal’s Asset Affairs work, the Authority is seeking to fill numerous vacancies currently available in its Roads Maintenance and Drainage Operations and Maintenance Departments. The positions available at the recruitment day included: senior asset management engineers, experts and engineers specialized in civil engineering, roads, ITS, electrical and mechanical systems, project management, Geographic Information System (GIS) and quality. In addition, Ashghal offered a range of opportunities for people to work as supervisors, roads and drainage networks inspectors and engineering moderators.
Al Kaabi stressed that as part of Ashghal’s strategic goals, the Authority will give priority to Qatari Nationals. To promote Qatarisation, Ashghal provides several rewarding opportunities for Qatari youth to contribute to the biggest infrastructure development being currently implemented in Qatar in preparation for the world cup and in line with the Qatar National Vision 2030.
Head of Recruitment Section at Ashghal Elham Abdulla AlYafei said that the employment day attracted a large number of qualified and experienced professionals. More than five engineers were recruited, more than700 resumes were received on the Authority’s website, and more than 100 candidates attended the recruitment day to apply for the vacancies.
“Only few Qatari professionals including engineers applied today and attended jobs interviews for the available vacancies and other administration posts. Ashghal is always looking towards increasing the number of Qataris among its taskforce in different specialities” she added.
It is worth mentioning that Ashghal organises a number of employment occasions on an annual basis; in addition to open days to introduce the Authority’s scholarship programme for Qatari students. The Authority remains in constant communication with Qatar University to attract talents in various fields related to Ashghal’s business.