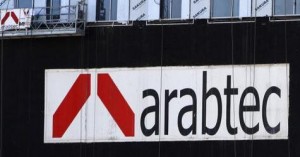 Arabtec Holding PJSC today announced its financial results for the first quarter of 2014, reporting a net profit attributable to parent of AED138 million, marking an increase of 121% on Q1 2013 AED62.5 million net profit. The company said the results were driven by strong delivery, improved commercial review of contracts, and growth of U.A.E. and GCC business.

The company’s Board of Directors, which approved the Q1 results at its meeting today, welcomed the growth in financial indicators, which will translate into more progress in the business and higher rewards for shareholders.

The first quarter also saw the gross profit margin growing from 12% to 15%, while the net profit margin increased to 7%, from 6% in Q1 last year.

The Board lauded the Executive Management’s efforts and achievements, as manifested in the financial results, backlog growth, and geographical expansion.

The Board noted with satisfaction that Arabtec is firmly on track to become a global leader. Today, it enjoys a strong financial position, with a huge and versatile backlog, and is well positioned to diversify into higher margin sectors.

The Board also reviewed the results of the Annual Ordinary General Assembly Meeting held on April 30, which unanimously approved the distribution of 40% dividends as bonus shares, which effectively increased the capital to AED4.439 billion, from AED3.139 billion.

The Board also vowed full support for the Executive Management’s efforts to implement “Arabtec Vision 2018” which will see the Company grow into the rank of the top 10 global companies, through diversifying into higher margin strategic sectors.

Hasan Ismaik, Managing Director and CEO of Arabtec Holding, commented “We continued to achieve high growth in profits and revenues, driven by our growing business in the U.A.E. and the Region, and more focus on delivery and profitability of projects.” Arabtec has already completed acquisition of Target Engineering, furthering its ability to bid for small to medium-scale EPC contracts in MENA’s oil and gas, power and related infrastructure. It has also expanded its MEP division, through the acquisition of the remaining minority stake in its subsidiary, EFECO, raising Arabtec’s ownership to 100%.

“We are planning a series of acquisitions and mergers in the forthcoming period. We are targeting global players in such high margin sectors as oil and gas, power plants, infrastructure, and facility management of huge industrial plants,” Ismaik announced.

“In four years’ time, Arabtec will grow from a medium-scale regional player into a global leader in specialised segments of the construction industry. The planned acquisitions and mergers will lead to significant synergies, in terms of accumulated experience, enhanced cash flow and stronger brand,” he added.

“Today Arabtec is in a good standing, with strong financial position and strong brand value. It has attracted high caliber experts to lead its foray into the strategic sectors targeted by Vision 2018,” Ismaik pointed out.

Through its Vision 2018, Arabtec aspires to grow from a medium-scale regional contractor to the ranks of the top 10 firms in the world. This leap is envisioned through expansion into specialized construction, oil and gas, infrastructure, property development, facility management, franchises, and health care. This expansion will lead to higher profit margins and better returns to shareholders. It will also allow the Company to maintain influence on these sectors and to have stable, recurring returns and will enable the Company’s value to grow many folds.

With its expanding business in the Region, Arabtec won AED26.2 billion worth of contracts in the first quarter of 2014, a growth of 28% over the AED20.4 billion registered in Q1 2013.

The implied total direct and indirect value of projects by the end of Q1 jumped to AED215 billion. This includes AED26.2 billion worth of projects in progress. In addition, the Company has signed a Memorandum of Understanding with Aabar for construction of 36 towers in Abu Dhabi, for AED21.8 billion. It has also signed another MoU for construction of the Red Sea Astrarium in Aqaba, the first of its kind in Jordan, at a value of AED5.7 billion. The pipeline also includes the one million housing units in Egypt, for AED147 billion, and AED14 billion worth of property development projects announced at Cityscape Abu Dhabi last month.

During the quarter, Arabtec launched five new subsidiaries, to expand the Company’s reach into new sectors, and in line with the Company’s strategy. Two of the subsidiaries will focus on infrastructure projects inside and outside the U.A.E., and a third will be engaged in property development. The other two will focus on education and training of nationals on construction-related disciplines, and on financial services, respectively.

The Company launched “Arabtec Properties” as its dedicated arm in the development of residential, commercial, and hospitality projects in the U.A.E. and the Region, with special focus on affordable housing. Arabtec Real Estate- is currently undertaking five high quality, world-class residential, hospitality and mixed use developments in Abu Dhabi and Dubai, with a total value of AED14 billion.

In the U.A.E., Arabtec signed a MoU valued at AED21.8 billion to build 36 towers in Dubai and Abu Dhabi, an agreement which will be one of the largest in the real estate sector in the region and Arabtec’s biggest project by value in the U.A.E.

Arabtec also won an AED1 billion contract to build 1,500 Emaar townhouses in Dubai as part of the Mira community in the first phase of the Reem development.

Arabtec is further contributing to Abu Dhabi’s infrastructure development as its MEP subsidiary, EFECO, was awarded an AED263 million contract to provide mechanical, electrical and plumping work at the Midfield Terminal building in Abu Dhabi as part of a joint venture.

The year 2014 also opened doors to new opportunities for Arabtec to expand across other growing markets. The Company announced its plans to open its first office in the Iraqi capital of Baghdad, to capitalise on the country’s high potential, particularly in the oil, and gas and infrastructure sectors. Arabtec also announced its plans to launch its regional headquarters in Belgrade, Serbia, to drive and diversify the operations of the Company and its subsidiaries in countries of the wider Balkan region.

Expanding further into the North African market, Arabtec signed a historic MoU with the Egyptian Ministry of Defence to develop and construct one million mid-income homes across thirteen locations in Egypt, with total development value of AED147 billion, the biggest project of its kind in the region and the first project for Arabtec Real Estate outside the U.A.E. The project, which is expected to create up to one million jobs for Egyptian people, is set to be completed over a five-year span, providing millions of Egyptians with affordable access to full-fledged communities, with public amenities such as schools, hospitals, parks and places of worship.