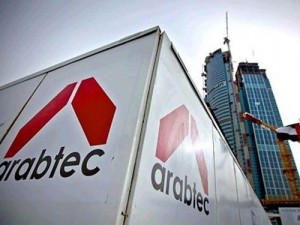 Properties, will be showcasing a series of its under construction and planned projects at the 8th annual addition of Cityscape Abu Dhabi.

The exhibition will run from 22nd-24th March 2014 at the Abu Dhabi National Exhibition Centre (ADNEC).

te developments, was launched with an aim to focus on lower to middle-income housing in a series of high quality, multi-use developments.

One of the Company’s first projects is also one of the biggest of its kind in the region, which will see Arabtec Properties construct one million homes in Egypt for lower income Egyptian families. This will provide millions of Egyptians access to full-fledged communities; with public amenities such as schools, hospitals, parks and places of worship. The project will be developed in 13 locations in a number of governorates across the country. A model will be displayed at Arabtec’s stand number 6D10, alongside a series of other planned projects in Abu Dhabi and Dubai.

In this regard, Hasan Ismaik, Managing Director and Chief Executive Officer of Arabtec Holding, commented, “Through our participation at Cityscape, we hope to introduce some of our upcoming exciting projects to our current and potential investors, as well as our plans for expansion the real estate development market. Our current focus for Arabtec Properties is to diversify the diversification of the Company’s portfolio and continue to extend its reach across the region.” “Arabtec is highly interested in exploring opportunities in the lower to mid income housing sector. Similar to the one in Egypt, our Company will soon announce a series of projects planned to take place across several countries in the GCC and across the Arab world. We are honoured to establish the presence of Arabtec Properties at one of the leading real estate and property development exhibitions, as it provides us with an ideal platform to unveil current and upcoming plans, as well as the Company’s vision for growth in the sector,” added Ismaik.

Arabtec Properties aims to showcase five mixed-use projects aside from the one in Egypt; three of which are in Abu Dhabi, and two in Dubai.

The Abu Dhabi-based projects include the Saraya development, two high-quality luxury towers on the Abu Dhabi Corniche, which will stand at 40 and 46 stories high. The towers will include a total of 122 apartments, comprising three and four bedroom apartments, as well as duplex apartments, three townhouses and seven penthouses. The project is due for delivery towards the end of the current year.

The C17 development will provide 809 parking spaces, as well as other recreational facilities such as swimming pools, gym and spa. This project is currently in the design phase, and is expected to be completed by 2018. Arabtec Properties will also showcase two Abu Dhabi-based project, Rancho Ghantout Development, which is still in the master plan development and feasibility study phases. The project will include fully serviced residential areas.

In Dubai, Arabtec Properties will develop two projects, Viceroy Tower and the P-17 development. Viceroy Tower development will consist of two towers located in the heart of Business Bay in Dubai. The first tower will offer a luxurious hotel with 440 rooms, while the second tower will have 136 serviced apartments. The towers will also provide top-

of-the-line spa and health club facilities, and retail outlets servicing tenants and the area, as well as 630 parking spaces. The 123,000sqm project is set for completion in November 2015.