Tanmiyat Global’s flagship project, The Court Tower, is set to be the first structure to be handed over following the opening of the Dubai Water Canal development next month. 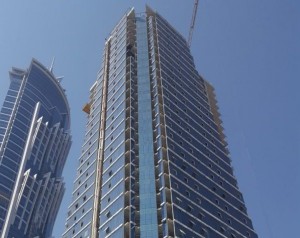 The $300mn mixed use project is 80 percent complete and is expected to be delivered to landlords in April 2017.

The Court Tower will contain apartments, offices and retail units and is the only mixed-use building currently situated on the Canal.

“The Court Tower is one of Tanmiyat’s most exciting projects as it takes up a prime location in Dubai’s most promising new area and next to the world’s tallest hotel, JW Marriott Marquis,” said Mohammed Bin Odah, CEO of Tanmiyat Global.

“Due to its close proximity to major industries in Business Bay and the impressive lifestyle facilities that will be on offer at the canal, we expect The Court Tower to be the new address for businesses and professionals in Dubai.”

The canal has reached the final phase of construction and phase one is set to open by the end of 2016, adding a new landmark to Dubai.

“Due to extremely competitive prices we have already sold 88 percent of our units and we expect this to move to 100 per cent by the end of the year. Savvy landlords who have invested early can hope for an estimated rental return of 10 percent for apartments and 7.5 percent for offices once the area is fully functioning,” continued Odah.

The Court Tower follows the handover of two of Tanmiyat’s prestigious developments earlier this year: The Exchange Tower, also in Business Bay, and the Living Legends Community in Dubailand.