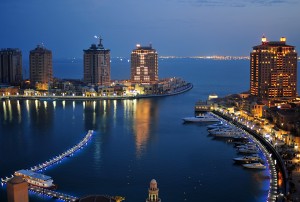 Growth in the Qatari economy accelerated in the second quarter of 2015. Real GDP grew by 4.7% year-on-year, according to the latest data released by the Ministry of Development Planning and Statistics (MDPS), compared with 4.0% in 2014.
As has been the case in the last few years, the non-hydrocarbon sector was the engine of growth, as hydrocarbon production broadly stabilised. A string of other releases show a continuation of growth and diversification into the third quarter despite substantially lower oil prices. This manifests itself in low inflation, strong population growth and large external surpluses. As a result, and with new gas production expected to come online, we expect growth to continue to accelerate to 6.4% in each of 2016-17.
The non-hydrocarbon sector continues to be the main driver of economic growth. It expanded by 9.1% year-on-year in the second quarter of 2015.
The largest contributors to real non-hydrocarbon growth were financial services, construction and trade, hotels and restaurants. Construction activity grew by 19.7% year-on-year reflecting the ongoing infrastructure projects. According to an analysis released by QNB Group, these projects include the new USD40bn Doha metro, real estate projects such as Musheireb in the centre of Doha (USD5.5bn) and Lusail to the north (USD45bn), as well as new roads, highways and further expansion of the new Hamad International Airport. Meanwhile, rapid population growth (mainly due to the influx of expatriates attracted by the implementation of large-scale projects) is generating demand for services. As a result, strong growth was recorded in financial services (10.0% in Q2 2015 over a year earlier); trade, restaurants and hotels (12.5%) and government services (6.3%).

On the other hand, hydrocarbon GDP was broadly unchanged in Q2, rising by only 0.9% year-on-year due to maturing oil fields and the moratorium on further gas production from the North Field. With the strong growth of the non-hydrocarbon sector and the stabilisation of hydrocarbon production, the Qatari economy is marching on with its diversification drive. Consequently, the share of the non-hydrocarbon sector in GDP rose to 61.7% in the second quarter from 59.8% in the previous quarter.
Beyond the second quarter, the latest indicators of the Qatari economy suggest a continuation of the strong growth and diversification drive into the second half of the year. The implementation of investment projects is moving ahead. This continues to attract expatriates, resulting in 10.2% year-on-year growth in population in August.
Therefore, the strong growth in the non-hydrocarbon sector should continue in Q3 even though oil prices have fallen by 19.4% during the quarter. This suggests that Qatar is capable of weathering lower oil prices thanks to a favourable macroeconomic environment characterised by low inflation, large external surpluses and healthy fiscal balances.
Facebook0Tweet0LinkedIn0Pin0