US President Barack Obama met at dawn Sunday with top military, intelligence, diplomatic, political and legal advisers at the White House to plan the U.S. response to the Syrian governments alleged massacre of civilians with chemical weapons, the White House said. 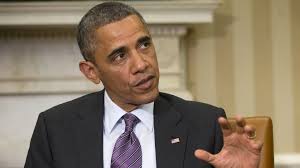 President Obama was given a detailed review of options for a potential U.S. response to the attack in Syria, amid a buildup of U.S. military assets in the region. No decisions were announced, and “the U.S. intelligence community continues to gather facts to ascertain what occurred,” according to a terse White House statement issued after a National Security Council meeting that included Vice President Biden and top defense, intelligence and diplomatic officials. But ongoing assessments, it said, were “mindful of the dozens of contemporaneous witness accounts and records of the symptoms of those killed.” The administration has made clear its certainty that the Syrian government was responsible for Wednesdays attack, which opposition activists have said killed hundreds, if not thousands, of people in a rebel stronghold east of Damascus. Among the options at Obamas disposal are cruise missiles launched from U.S. warships, the Washington Post reported. Other options range from sending sophisticated weapons to Syrian rebels to using U.S. air power to establish a no-fly zone over rebel-held areas. Cruise missiles, if they were deployed, would most likely be fired at Syrian military installations as a warning to the Syrian government of U.S. seriousness regarding chemical weapons use, rather than an attempt to immediately alter the balance in the ongoing civil war, it added.