Nakheel awards contracts worth over AED47 million for Deira Islands 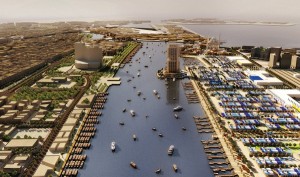 Dubai developer Nakheel has awarded contracts worth over AED47 million for design and supervision services on Deira Islands including the Night  Market and Board Walk on the project.

Nakheel appointed AE7 for the design and supervision services including Master Planning, Parcelization and Infrastructure Design for Deira Islands, its new, 15.3 square kilometre waterfront city, under a contract worth AED28 million.

The same firm was also awarded another contract worth AED19.5 million covering the Architectural and Engineering services for the built form of the Night Market and Board Walk, two main attractions on the 4.5 million square metre south island.  This unique creek side destination will be easily accessible from the mainland by road bridges and abras. The island’s other attractions will include a large shopping mall; an amphitheatre for 30,000 people; and a marina that can accommodate large yachts.

Tender documents for the construction of infrastructure are expected to be released around the middle of May 2014, following which companies will be invited to collect.

The master developer has already witnessed great interest in the project when it released its first phase of plots end of March 2014 – ranging from 50,000 to 670,000 square feet – for hotel and resort development on two of the four islands that make up the project.

Deira Islands, which will add 40 km, including 21 km of beachfront, to Dubai’s coastline will contribute significantly to the Government of Dubai’s tourism vision. This project paves the way for the development of hotels and serviced apartments, mixed-use buildings and residential waterside developments at what will become a new cultural, residential and commercial hub for the emirate.