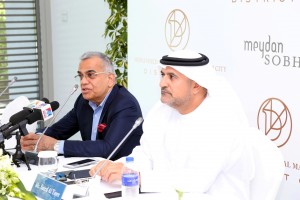 Chair of Meydan Group Saeed Humaid Al Tayer and chair of Sobha Group PNC Menon revealed that the phase-one and phase-two of District One were already sold out with a handover scheduled from mid-2016 to end of 2017.

With over 9,000 construction workers currently working on the project, the development is said to be the “pinnacle of luxury”, according to Al Tayer. With a prime location of the inner city, along with seven kilometre manmade lagoon, green landscaping, larger plots, and extended payment plans, the development would add another dimension to Dubai as a luxury capital.

Phase-three will have 270 units that include four to six-bedroom units to be handed over by 2018. Construction of this phase will be carried out by the same main contractor of phase-one and two, MS Construction.

Menon stated: “We expect keen demand for the villas in Phase 3, as we are offering home owners bigger plots, a variety of new floor plans, as well as the option to include a basement.”

As the GCC real estate market slows down in 2016, Al Tayer stresses that market climate does not affect projects like District One. “Projects like this only come up once in a lifetime.”