Qatar’s Al Balagh Trading & Contracting and India’s Larsen & Toubro (L&T), have won the main contract to build Al Rayyan Stadium, a 40,000 seat venue that will host games up to the quarter-finals at the 2022 FIFA World Cup. 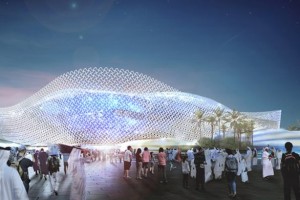 The Ramboll and Pattern stadium design is inspired by local patterns and structures that resemble the sand dunes that surround traditional desert tents. Post tournament the stadium will accommodate 20,000 seats and will be home to Al Rayyan Sports Club.

Though the value of the project was not revealed, some reports have pegged it at $135mn.

“With the main contractor coming on board today, this marks an important milestone in our progress and preparations for the 2022 FIFA World Cup,” said His Excellency Hassan Al Thawadi, Secretary General of the Supreme Committee for Delivery & Legacy (SC).

“The impact of this stadium and its surrounding precinct will be felt long before the stadium is finished in 2019, with the recently completed outdoor training pitches set to be used by the current QSL Champions, Al Rayyan Club, for their upcoming Qatar Stars League season.

“We are confident that Al Rayyan Stadium will become a landmark for the area and benefit the entire community from now until long after the last ball is kicked in 2022.”

The SC will also launch the designs of Lusail Stadium, Ras Abu Aboud Stadium and Al Thumama Stadium within the upcoming year and officially launch the completed Khalifa International Stadium in early 2017.

Construction of all infrastructure for the 2022 FIFA World Cup is slated to be completed by 2020, two years prior to the tournament.