A joint venture led by Cyprus-based Joannou & Paraskevaides (J&P) has been confirmed as the main contractor for the Qatar Foundation Stadium, the fifth venue to begin construction for the 2022 FIFA World Cup. 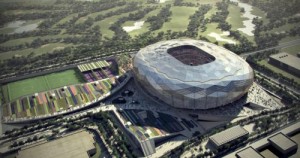 Located in Doha’s Education City, the stadium is scheduled for completion by the end of 2019, The Supreme Committee for Delivery & Legacy (SC) said revealed in a statement confirming reports that emerged several weeks ago.

Preparation work completed by the CCC/TCC JV in July included further bulk excavation works of a total volume of 650,000 cubic meters to formation level, and implementation of a dewatering system for the next main-package contractor.

By the end of the year the J&P joint venture will be fully mobilised on site, progressing with the schematic design, finishing the foundation works and securing a substantial portion of the structural steel for the super structure.

“We are pleased with the progress of Qatar Foundation Stadium and are hitting our construction deadlines. With the Main Contractor now appointed we look forward to watching it grow from foundation level to full completion in 2019,” said His Excellency, Hassan Al Thawadi, SC Secretary General.

“Over the next four years we’ll be working closely with our new partners to ensure we deliver an outstanding, legacy-orientated stadium at Education City that will serve the community long after the last ball is kicked.”

The project is being delivered in conjunction with ASTAD PROJECT MANAGEMENT, a wholly owned Qatari Company, who assumed the role of Project Management, Construction Management and Construction Supervision.

Eng. Hilal Al-Kuwari, Technical Delivery Office Chairman at the SC, said: “This signing demonstrates the progress being made as we head towards 2022, with five stadiums sites now at main construction stage. The next 12 months will be crucial for the tournament’s progression as we prepare another three sites for works, with the SC and its partners managing eight live construction sites by mid-2017.”

The Qatar Foundation Stadium is located within the Hamad Bin Khalifa Sports Complex (HBKSC) located at the Western area of the Education City South campus.

The venue will have a net capacity of 40,000 spectators, which will be reduced to a net capacity of 25,000 seats after the tournament to fulfil Education City’s own legacy needs for world-class multipurpose sports facilities.