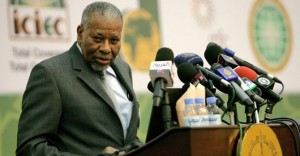 Islamic Development Bank (IDB) President Ahmad Mohammad Ali said Sunday IDB’s funding operations for member and non-member countries exceeded USD 100 billion, either through private and public sectors.
Ali, at a joint news conference with and Director of the International Islamic Trade Finance Corporation (ITFC) Waleed Al-Wohaib, thanked Kuwait or its “great support” for IDB since its establishment in 1973, when Kuwait contributed USD 40 million.
He said IDB was adopting precautionary policies in anticipation of financial crises and was not suffering from short-term debts thus keeping its AAA rating for 10 consecutive years.
IDB, which celebrates its 40th anniversary next month, is the largest Islamic bank in terms of capital, he said, thus capable of carrying out giant fundings.
Since its establishment, added Ali, the IDB has been working on strengthening common Arab and Islamic action, as well as boosting trade exchange among Islamic countries.
Ali said IDB, whose profits have risen to around USD 200 million last year, has been investing in agriculture and food sectors as well as diversifying operations in fields of industry, education and investment.
Al-Wohaib said one of the major objectives of the ITFC since its establishment five years ago was to increase the Islamic trade from 14 percent in 2005 to 20 percent next year.
IFTC aims at boosting trade capabilities of the Arab countries, he said.