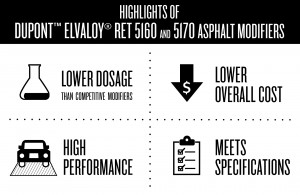 DuPont participates at the 6th Middle East Bitumen/Asphalt Conference taking place from May 12 to 14, 2015 at Shangri-La Hotel in Dubai to leverage the rapidly expanding market for infrastructure development in the Middle East. During its presence at the show, the company will throw the spotlight on two newly introduced Elvaloy® Reactive Elastomeric Terpolymer (RET) asphalt modifier grades.

DuPont™ Elvaloy® RET 5160 and 5170 modifiers are the latest addition to the company’s growing portfolio of asphalt modifiers that can endure the effects of weather, heavy traffic and loads, extending the drivable life of roads and highways and lowering road-repair costs. The new grades also are shown to meet performance requirements at lower additive rates than competitive products to further lower overall cost.