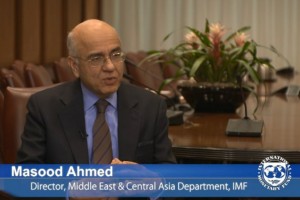 Dubai International Financial Centre (DIFC), a global a global financial hub connecting businesses and institutions with emerging market opportunities across the Middle East, Africa and South Asia (MEASA), on Wednesday hosted a conference in partnership with the International Monetary Fund (IMF) to discuss its latest economic outlook for the Middle East, North Africa and Pakistan (MENAP).

The IMF issues the economic outlook for the region bi-annually in a detailed report (mediacenter.imf.org) that examines the impact of present-day geopolitical and socio-economic factors on the region’s economies.

The report examines the impact of conflicts and low oil prices on the region’s oil-exporting and oil-importing countries. It also examined the impact of Iran’s deal with World powers on the economy of Iran and on the global economy.

Masood Ahmed, Director of the Middle East and Central Asia Department, IMF, said: “The near-term outlook for the MENAP region is dominated by geopolitical and oil price developments. Regional uncertainties arising from the complex conflicts in Iraq, Syria, Yemen, and Libya are weighing on confidence. Low oil prices are also taking a toll on economic activity in the oil-exporting countries.”

In his welcome address, Arif Amiri, Deputy Chief Executive Officer of the DIFC Authority , said that the near-term economic challenges should not be allowed to obscure the upward economic trajectory of the overall region and also highlighted the value of the DIFC as a hub to access cross-border trade and investment opportunities.

Arif Amiri said: “For over a decade, DIFC has been one of the fastest growing international financial centres in the world. Strategic collaboration, internationally recognised legal and regulatory frameworks, and innovation have been at the very core of what has driven the sustainable development of the economy at large. In addition, the mobilisation of trade in the South-South economic corridor offers further significant opportunities for DIFC to strengthen its position as a major financial hub.”