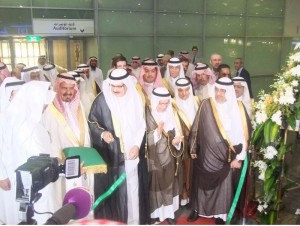 King Abdulaziz’ public transport project in Riyadh was an important highlight of the exhibition. Showcased by the High Commission for the Development of Riyadh, the project was featured through an immense stand extending beyond 1,000 m2.

Eng. Alhathlool said: “I’m glad to be part of the exhibition today on behalf of Eng. Engineer Abdullah bin Abdulrahman, Minister of Transport. We have seen across the exhibition that we are now on top of the mega projects within the transport industry, whether in the city of Riyadh or Jeddah or Makkah or the eastern province. We will also achieve a milestone within the transport sector on different levels including the national projects and capabilities. We also wish the companies and everyone else good luck. “

For its part, the Ministry of Transport used its booth to showcase future projects and its vision for the development of the transport field along with integrated facilities and services to exhibit the sector’s impact on economic and social development.

The Saudi Railways Organisation provided an update regarding the status of the projects being implemented, including the Haramain High Speed Rail Project and its stations. They also discussed future plans to construct new stations and integrate the latest technologies to develop modern passenger and cargo transportation programmes.

Representing the corporate sector, Saudi Bin Laden Group participated in the exhibition to showcase the company’s diverse portfolio of infrastructure projects currently being implemented. These new undertakings include a new airport at the heart of the Kingdom, as well as railway projects that will greatly contribute to the transportation of industrial and commercial products. For its part, the Saudi Public Transport Company reviewed bus models, mass transport systems, and their contribution to the Riyadh Metro project.