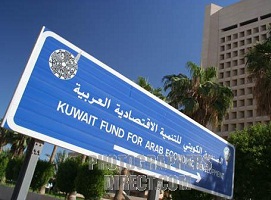 The Kuwait Fund for Arab Economic Development (KFAED) and Lebanon signed here on Thursday a KD 6 million (USD 21.2 million) loan agreement.
The deal was inked by KFAED Director General Abdelwahab Al-Bader and Lebanese Minister of Energy Arthur Nazarian in presence of Lebanese Prime Minister Tammam Salam.
The loan will be used in financing a water project in Zahle City and its suburbs in east Lebanon.
Following the signing ceremony, the Lebanese prime minister highly appreciated the State of Kuwait for its permanent support and help to Lebanon in different stages.
Salam also lauded the efforts of the Kuwait Fund for Arab Economic Development (KFAED) in backing Lebanon’s economic and social development process.
On his part, the KFAED chief said the water project aims to help in water conservancy and in securing additional water quantities.
He added that the loan would cover 48.4 percent of the costs of the Lebanese water project, while the Lebanese government would have to pay the rest.