Alonso fastest as Formula One gets back on track 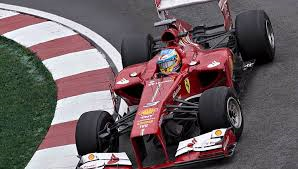 Ferrari’s Fernando Alonso lapped fastest in a weather-affected Belgian Grand Prix first practice session on Friday as Formula One drivers shrugged off the long August break and got back up to speed.

The Spaniard, third in the championship after 10 of 19 races, lapped the longest circuit on the calendar with a best time of one minute 55.198 seconds in a familiar Spa mixture of wet and dry conditions.

The two Force Indias of Paul Di Resta and Adrian Sutil were second and third on the timesheets, with the top three all setting their comparatively slow times in the final half hour of an incident-free session.

Morning rain, and occasional drizzle interspersed with cloud and sunshine, dampened part of the fast and flowing Ardennes forest circuit while a dry line emerged through the middle sector.

The McLarens of Briton Jenson Button and Mexican Sergio Perez showed encouraging signs of progress, despite the team backing away from earlier assertions that they could challenge for a victory this weekend.

Red Bull’s championship leader Sebastian Vettel, who has a 38 point lead over Lotus’s Kimi Raikkonen, was sixth fastest behind fellow-German Nico Rosberg in the Mercedes.

Vettel, who returned from the break with his hair dyed bright blond, had the odd spin on the slippery surface without drama.

Raikkonen, who cried off sick on from media engagements on Thursday after weeks of speculation about his future and talk of moves to Red Bull or Ferrari, and Lotus team mate Romain Grosjean propped up the timesheets.

Finland’s Heikki Kovalainen, dropped by Caterham at the end of last year, made an appearance for the team in place of regular race driver Charles Pic and was 16th quickest.