USD drops to KD 0.281 but other currencies rise 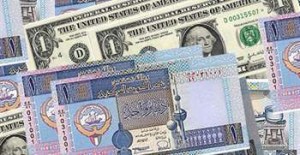 Exchange rate of the US dollar against the Kuwaiti dinar fell to KD 0.281 on Sunday but the euro rose to KD 0.384 compared to Thursday’s rates.
Central Bank of Kuwait said in its daily bulletin that the sterling rose to KD 0.473. The Swiss franc followed suit, reaching KD 0.315, however, the Japanese yen was unchanged at KD 0.002.
On the external monetary front, latest economic reports in the United States were mixed, with regard of employment in the public and private sectors, the trade balance and the relief services.
In Europe, the European Central Bank, on Thursday, cut interest rates and took unconventional steps to prevent the 18-country euro zone from sliding into a bout of deflation that could kill off a muted economic recovery. The ECB’s steps aimed to raise inflation and push more credit into an economy where lending is weak. The steps include cheap, long term loans to banks, tied to the understanding banks would loan the money to businesses, boosting growth.
The ECB also took the unorthodox and untested step of imposing a negative interest rate on money banks’ deposits, an attempt to push them to give loans.