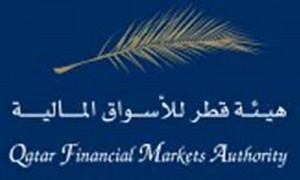 Qatar Financial Markets Authority (QFMA) is making great efforts in the development of legislations regulating Qatar capital market in order to increase the efficiency of legislations and expand the size and quality of the activities on Qatar Exchange.
According to OFMA 2013 Annual Report, during 2013, the Board of Directors approved on several legislations, namely: Rules of Licensing and Regulating Depositary, Capital Adequacy Standards for Financing Services Companies, Acquisition and Merger Regulations, Selling Rights Issue Regulations, Corporate Governance Code in Venture Markets, Amend some articles in Listing & Offering of Securities in the Venture Market and Amend some articles in Corporate Governance Code in the Main market.
The Board approved on the QFMA’s proposal to reduce the nominal value of shares in listed shareholding companies to become QR 1, and take the necessary steps in this regard with the concerned parties, in preparation for adopting the nominal value by QR 1 to be a condition for licensing of new companies listing in the future and giving the existing listed companies sufficient time to adjust their positions.
The Board also approved on the new organizational structure, including developing new departments, which helps the QFMA to achieve its mission and vision regarding the future of the financial markets in Qatar according to the strategic plan. The new organizational structure also enables the QFMA to perform its functions determined by Law No. 8 of 2012 and helps to achieve the principles of regulatory and supervisory policy.
The QFMA approved on reviewing Procedures of Complaints, Code of Conduct, Risk Management Policy and Procedures Manual for and QSCD rulebook.
Procedures taken in implementation of the Board decisions, included: Issuing a circular to limit the percentage of payback commission provided by licensed companies that practice the brokerage activities, Activating liquidity provider activity on Qatar Exchange and Activating the exemption of some investors prepayment in Qatar Exchange.

The QFMA participated in the launch of a joint strategic plan of the financial sector in Qatar, which sets out the sector strategic vision and roadmap over the next years and pave the way towards improving not only activities and financial services, but also technical and human resources in the sector. The QFMA is keen to be a main participant in drafting the financial sector strategy in the country through its active role and its ongoing cooperation with Qatar Central Bank (QCP) and Qatar Financial Centre Regulatory Authority (QFCRA).
At end of 2013 and coinciding with the launch of the financial sector strategy of the State of Qatar, the QFNA outlined its strategic plan 2013-2016. The QFMA invited parties associated with the capital markets in the State for seeing its future vision and its mission to the market and all people dealing in the market and for seeing QFMA’s strategic objectives and future projects to develop the Qatari markets.
As a part of QFMA’s diligent effort in activating participation of all parties associated in the local markets in regulating and developing the financial markets, the QFMA has prepared and consulted about a draft of “Selling Right Issue Rules” which aims to protect the right issue holders who do not practice their rights in the capital increase subscription, so right issues listed as a security can be sold through the market.
The QFMA also consulted for the proposal of reducing the nominal value of shares in listed shareholding companies to become QR 1 instead of QR 10 because of its active role in the capital market and increase in liquidity, increase the investor base, increase share turnover ratio and attract a news segment of investors.
The QFMA launched its new website after developing and updating and supplying with all information and data that can help investors and other parties associated with the securities market in making investment decision and other decisions related to their dealing and activities within the market.
The QFMA launched its application on iPhone and iPad devices (Apple store: QFMA) for the latest news to be followed easily and for the most important issuances of the QFMA to become accessible by those interested and dealers in the capital market.
The QFMA Short Messages Services (SMS) aimed to communicate all the QFMA’s associated categories smoothly and easily by sending a message containing the subject of each category.
The QFMA exerted intensive efforts in the area of control and supervision of the parties related to the operation in the Qatari capital market to emphasize that the Qatari market deserves the international recognition, and to keep the performance of the Qatari market and persons dealing in the market compatible with the international standards, as well as to stabilize the markets and protect investors.
The control and supervision represented in monitoring trading, analyzing trading operations in securities market, in addition to control the parties subject to the QFMA’s jurisdiction to check their commitment to its issued legislations. The QFMA also conducted the control on listed companies by following up their disclosures and declarations issued via various media so as to ensure implementing the disclosure requirements prescribed in the QFMA’s legislations.
The QFMA followed up the information disclosed by listed companies to the public in all means of publishing and advertising. It also checked the disclosure of all listed companies about the periodic financial statements during the year, and reviewed the reports of corporate governance of these companies as well as requested to amend some of them to comply with the Corporate Governance Code issued by QNFA.
During 2013 the QFMA received: Four (4) IPO requests and issued the final approval for the prospectus, approved by the Ministry of Economy and Commerce, of Mesaieed Pharmaceutical Holding Company (MPHC), Eleven (11) requests for listing government Treasury Bills (T-Bills)”three six and nine months” and 3 government bonds (three and five years) and 3 new acquisition requests for: 1- Acquisition of Alaternatifbank AS, majority-owned subsidiary of Commercial Bank of Qatar QSC for (99.9%) shareholding of Turkish Alternatif.
2- Finansal Kiralama AS, Acquisition of Al Salam Company on non-Qatari company.
3- Mannai Corporation Acquisition by its subsidiary Gulf Laboratories (49%) of Al Mannai Transfield Company.
As part of following up acquisition request submitted previously, the QFMA has issued the following decisions: 1- Approval on the acquisition of Al Ijarah Holding on (100%) of Al Nasr Modern Driving School.
2- Non-approval on the acquisition of Al Ijarah Holding (100%) of Petro Qatar for Industrial Projects.
3- Approval on Al Salam International for Investment to buy additional shares of Salam Bounian Development Co.
4- Non-objection of that Masraf Al Rayan to complete acquisition of Islamic Bank of Britain.
The QFMA also approved on listing new 247.2 million shares to increase the capital of listed companies during 2013.
The QFMA issued six licenses to practice the activities of liquidity provider, central depositary, investment trusteeship, providing advice on securities, managing issuance of securities and underwriting issuance of securities.
The QFMA approved on the appointment of Al Rayan Bank as an issuer manager for the IPO of Doha Global Investment Company.
The QFMA approved on the rules of Qatar Security Central Depositary (QSCD).