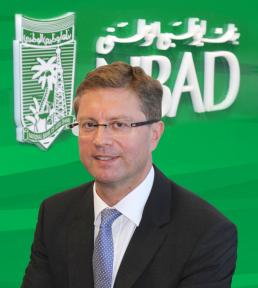 Mr. Burdett will lead the group finance, strategy, group treasury, and investor relations functions. His primary responsibility is to ensure that NBAD’s financial planning and strategic alignment continues to support the Bank’s growth. He is a member of the Bank’s Executive Management team and reports directly to Alex Thursby, NBAD’s Group Chief Executive Officer.

“Recruiting James reflects NBAD’s brand strength to attract high calibre international bankers and our strategic ambitions for significant growth in the U.A.E. and across diverse geographies,” said Mr. Thursby in a press release.

“James is a seasoned banking professional with varied international experience having worked for global banks in different countries. This extensive career experience will add significant value to NBAD as we deliver against our strategy across the West East corridor,” Mr. Thursby said.

On his appointment, Mr. Burdett said, “NBAD is a robust financial institution which benefits from being located within one of the most dynamic economies of the world. As such, NBAD is well poised to successfully deliver its ambitions of growth across the West East Corridor and I am thrilled to be a part of this challenge.” NBAD has been ranked in the World’s 50 Safest Banks since 2009 by Global Finance, and the Safest Bank in the Emerging Markets. NBAD also has one of the highest credit ratings among the world’s commercial banks.

Mr. Burdett holds a degree in Finance and Accounting from Auckland Institute of Technology and is a Chartered Accountant.