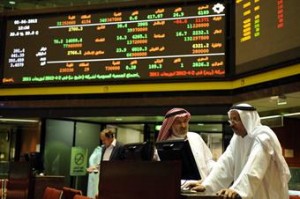 Kuwait Stock Exchange (KSE) is conducting regular review of the market index, Kuwait-15, for May, according to which several companies and institutions will be withdrawn.
The companies, deemed unqualified to remain in the main index list were Al-Ahli Bank of Kuwait, Warba Bank, Jazeera Airways, Kuwait National Investment Company and the National Real-Estate Company.
The bourse said in a statement that the dropped-out companies would be replaced by Kuwait Food Company (Americana), Boubyan Bank, Ahli United Bank, Boubyan Petrochemical Company and Al-Gurain Petrochemical Industries Company.
Also to be taken out of the main index are Dubai Al-Oula Real-Estate Development Company, Kuwait Real-Estate Company. They are being replaced by Warba Bank, Jazeera Airways and the Commercial Real-Estate Company.
It added that “results of this review would be applied on mechanisms of Kuwait-15 as of June 19.” Last December, the KSE conducted its first review of the Kuwait-15 index, introduced in mid 2011, and said there would be regular reviews late May and late November each year.
KSE’s data and indices work-team had issued a statement saying the objective of the regular review is re-assessment of companies’ status and merit against set criteria, which could mean exit of certain stocks and debut of others into the Kuwait-15 group.
Among top criteria are a company’s liquidity and market value, and the team starts by short-listing stocks of the top 50 companies to later decide on just 15 for the index. As an additional measure in case a company drops off the list, the team would also select three companies that would make the list in such event.
The KSE statement had pointed out that the Kuwait-15 companies represent 68.02 percent of overall market value, and 51.43 percent of the overall liquidity.