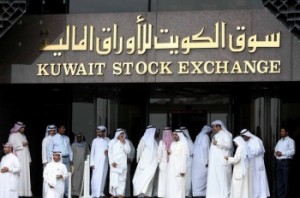 Kuwait Stock Exchange (KSE) ended last week in the red zone for the third consecutive week amid growing political tension, absence of positive motivators, drop in the purchasing desire of many investors, a specialized economic report showed Saturday.
The report, by Bayan Investment Company, pointed out that the Price Index closed at 7,406.40 points, down by 0.33 percent from the week before closing, the Weighted Index decreased by 0.16 percent after closing at 492.03 points, whereas the KSX-15 Index closed at 1,200.47 points down by 0.20 percent.
Furthermore, last week’s average daily turnover increased by 11.05 percent, compared to the preceding week, reaching K.D 22.58 million, whereas trading volume average was 150.97 million shares, recording a decrease of 10.63 percent.
The report said that the market’s drop came in light of the return of the political conflicts to negatively influence the traders’ psychological behavior, in addition to the absence of the positive motivators and the drop in the purchasing desire of many investors, waiting for some improvements or appearance of positive indicators to push them towards purchase.
“Moreover, the stock market witnessed, during most of the week’s sessions, selling pressures that included many stocks, both large-cap and small-cap, in addition to the presence of the speculative operations to affect the trading activity as well, which caused the general index to decline to its lowest level in many months in one daily session, in particular since 9th September 2013,” reads the report.
“Also, the decline in the purchasing power that the stock market witnessed last week by few traders and the investment portfolios, lowered the liquidity to very low levels, as it recorded its second lowest level during this year in one session last week.” On the contrary, Bayan noted that the purchasing and collection operations were not absent during last week’s trading activity, as the market was able to realize gains in few sessions, supported by the random purchasing operations performed on some stocks, especially the ones that disclosed positive first quarter financial results, mainly in the Banking sector.
“On the other hand, the stock market is still witnessing a watch state in general, waiting for the listed companies first quarter financial results, among fears by investors of some companies to fall behind the disclosure period given, which legally ends by the end of the current week.” For the annual performance, the report stated that the price index ended last week recording 1.57 percent annual loss compared to its closing in 2013, while the weighted index increased by 8.82 percent, and the KSX-15 recorded 12.58 percent growth.
At the sectorial level, the data showed that eight of KSE’s sectors ended last week in the red zone, three recorded increases, whereas the Health Care sector’s index closed with no change from the week before.
The Basic Materials sector headed the losers list as its index declined by 1.43 percent to end the week’s activity at 1,175.47 points. The Financial Services sector was second on the losers’ list, which index declined by 1.03 percent, closing at 1,036.14 points, followed by the Insurance sector, as its index closed at 1,132.07 points at a loss of 0.75 percent. The Consumer Goods sector was the least declining as its index closed at 1,300.88 points with a 0.35 percent decrease.
On the other hand, last week’s highest gainer was the Technology sector, achieving 2.02 percent growth rate as its index closed at 983.36 points. Whereas, in the second place, the Consumer Services sector’s index closed at 1,117.97 points recording 0.91 percent increase. The Industrial sector came in third as its index achieved 0.50 percent growth, ending the week at 1,156.34 points.
Meanwhile, the report indicated that the Financial Services sector dominated total trade volume during last week with 280.35 million shares changing hands, representing 37.14 percent of the total market trading volume. The Real Estate sector was second in terms of trading volume as the sector’s traded shares were 30.80 percent of last week’s total trading volume, with a total of 232.50 million shares.
On the other hand, the Financial Services sector’s stocks were the highest traded in terms of value; with a turnover of K.D 29.41 million or 26.05 percent of last week’s total market trading value. The Banking sector took the second place as the sector’s last week turnover was K.D 25.21 million represented 22.34 percent of the total market trading value.