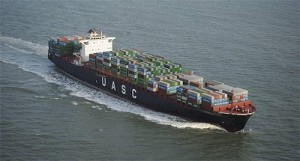 Burgan Bank announced Monday that the bank’s Corporate Banking Group has successfully completed a bilateral finance deal with United Arab Shipping Company (UASC), the largest shipping company in the Middle East.
As per the deal, the Bank will provide UASC with USD 190 million loan to finance the acquisition of two 14,000 TEU vessels from UASC’s new building order of 17 vessels including 11 14,000 TEU vessels and six 18,000 TEU vessels.
“We at, Burgan Bank, are committed to support a reliable partner such as UASC on their growth journey,” Raed Al-Haqhaq, Burgan Bank ‘s Chief Banking Officer – Senior General Manager, commented in a press release issued Monday.
“Burgan Bank’s corporate banking group continues to expand its finance deals with its corporate clients to support them in executing their strategic plans at every stage of the business cycle.” For his part, Basil Al Zaid, Chief Financial Officer of UASC, said that the deal bolsters cooperation with Burgan Bank.
“Our established strategic relationship with Burgan Bank, further cemented through this transaction, demonstrates the close co-operation between UASC and Burgan Bank.
“As the UASC vision is ‘Linking the Middle East to the World’ we appreciate Burgan Bank for supporting this facility. Burgan Bank has showed strong support for the project from the initial stages working alongside other stakeholders to ensure the successful implementation of UASC’s financial strategy and expansion plans to offer comprehensive and cost competitive shipping solutions to clients worldwide.” Jorn Hinge, UASC President & Chief Executive Officer, also cheered the deal.
“In an environment where fuel oil remains the largest cost driver in the industry, our cutting-edge vessel designs have been developed with a clear focus on improving cost efficiency and enhancing environmental friendliness,” he said.
“We are first-movers with these ‘Green’ new buildings that will be equipped for LNG duel fuel for the first time in the long haul container trades.” UASC is owned by six Gulf countries, namely Kuwait, Qatar, Saudi Arabia, Bahrain, United Arab Emirates and Iraq.
Established in 1977, Burgan Bank is the youngest commercial Bank and third largest by assets in Kuwait, with a significant focus on the corporate and financial institutions sectors, as well as having a growing retail, and private bank customer base.
Burgan Bank has five majority owned subsidiaries, which include Jordan Kuwait Bank, Gulf Bank Algeria, Burgan Bank – Turkey, Bank of Baghdad, Tunis International Bank, in which Burgan Bank owns a majority stake. Burgan Bank Group has one of the largest regional branch networks with more than 231 branches across Kuwait, Turkey, Jordan, Algeria, Iraq, Tunis, Lebanon and Palestine.