Table9 chef patrons Scott Price and Nick Alvis’ first project after joining Albwardy Investment Group at the start of 2014 will be to open a new casual dining restaurant. 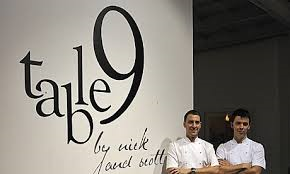 In comments published by Hotelier Middle East, the duo revealed that their first new venture with the group will be mall-based and will be more casual than their current Table9 outlet with an all-day dining possibility.

Alvis said: “There’s a lot of competition in that market as well so hopefully we can do something that no one else is doing.”

“They  want a range of casual dining restaurants so we’re going to help them design it and bring it to life,” added Price

Last month, Hilton Worldwide announced that Alvis and Price had agreed to join the Dubai based Albwardy Investment Group to launch new F&B concepts at the firm’s outlets in the UAE.

Alvis said: “We’re not consultants; we’re getting our hands dirty and building the restaurant from scratch … an empty shell, a completely blank canvas. They want our experience and expertise, so to speak, to help them create a restaurant, which hopefully we will be able to copy-paste in other parts of the city.”

Price said the project is something they haven’t done before, and Alvis added that the “opportunity to develop something from nothing was like a dream come true”.

The ‘by nick and scott’ label will be removed from Table9, with Hilton Dubai Creek promising a new culinary team.