Dubai Customs and the General Directorate of Residency and Foreigners Affairs – Dubai have jointly held a staff mass wedding this evening under the theme “Shayaheen Al Emarat”.

A total of 87 grooms – 42 from DC and 45 from GDRFA- were celebrated in what has indeed become a tradition for Dubai Customs, as this year’s mass wedding marks the fourth year for DC and the second year as a joint venture with GDRFA. 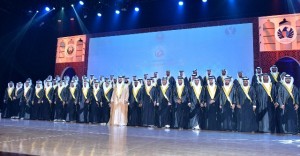 Sultan bin Sulayem, Chairman of DP World and of Ports, Customs and Free Zone Corporation congratulated the newlyweds, saying that mass weddings have sublime and humane objectives towards enhancing the social structure pillars and cementing its texture.

“Mass weddings are in line with the state’s drive to curb extravagances and excessive wedding costs and promote solidarity,” Bin Sulayem said.

Stressing the importance of mass weddings, Major General Mohammed Ahmed Al Marri said: “This kind of weddings is becoming a cornerstone in our community. In this occasion, I would like to reiterate our support to such community events that aim to help UAE youth as their take their first steps to building cohesive and stable families.”

Ahmed Mahboob Musabih expressed his contentment with this social initiative. He said: “This joint mass wedding exhibits solidarity and a profound sense of unity amongst Emiratis, following the steps of the late Sheikh Zayed bin Sultan Al Nahyan, and conforming with the directives of President His Highness Sheikh Khalifa bin Zayed Al Nahyan and the Vice President and Prime Minister of UAE and Ruler of Dubai, His Highness Sheikh Mohammed bin Rashid Al Maktoum, as they repeatedly called for the sons and daughters of this country to stand as one.”

Dubai Customs’ Director of Communication and Head of the Joint Mass Wedding Organising Committee, Khalil Saqer bin Gharib said: “We at Dubai Customs have committed ourselves to hosting a staff mass wedding every year since 2012.