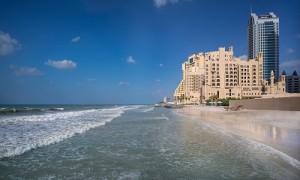 The Ajman Tourism Development Department (ATDD) released the emirate’s latest tourism statistics for the third quarter which shows a significant increase of 47% in total revenue when compared to the same period in 2014.

According to ATDD, total tourism revenue for the months of July, August and September 2015 has reached AED80.05 million, a big jump from last year’s AED54.6 million. This can be attributed to the increase in occupancy rate, average room rate and additional inventory of rooms and units in Ajman.

There was a slight decrease in the number of visitors to Ajman,but the number of guest nights grew by 49%, from 201,596 in 2014 to 300,948 in 2015. Local residents and other visitors from GCC and other Arab countries still make up the bulk of the guests to the emirate followed by Asians and Africans, Europeans, Russians and Americans. However, Asians and Africans have the highest room nights during their stay followed by local, GCC and other Arab guests.

Faisal Al Nuaimi, General Manager of Ajman Tourism Development Department, said: “The figures are extremely encouraging knowing that the third quarter of the year is the lean period for the hotel industry because of the summer season and Ramadan. We anticipate continued growth in our source markets with the new marketing strategies and brand identity that we will unveil soon. This will position the emirate of Ajman as a leading destination for business and leisure.”

The department also shared the status of the 2016 marketing plan to representatives of hotels, tour operators and travel agencies who attended the meeting. The detailed plan highlighted the new brand positioning statement of the emirate, the target markets and the different programs that will be carried out across the emirate starting next year to reach the target of five million visitors annually by 2021.

Ms. Habiba Al Marashi, Co-Founder and Treasurer of Emirates Green Building Council (EGBC),also made a presentation on how the UAE can be a global leader in having a sustainable environment. She said the hotels play a major part in this awareness campaign by ensuring that they practice the most effective ways of consuming energy and resources. She encourages them to engage the hotel staff in these energy saving practices and share the same with the guests.

Other important activities such as upcoming sporting events at the recently opened Al Zorah Golf Course were also discussed as a unique opportunity to promote Ajman as a golfing destination.

Al Nuaimi highlighted the needed support from the industry stakeholders to position the emirate on the world tourism stage.