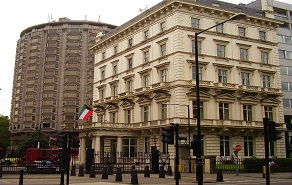 The Kuwaiti Embassy in London issued Sunday a travel advice to nationals planning to travel to the United Kingdom to help nationals enjoy trouble-free stay in the country.
Travelers must abide by the country laws and at the forefront of which visa law and regulations, Kuwaiti Consul Mashaal Al-Mudhaf told KUNA as he detailed the main features of the travel advice.
He warned against using a visa issued for a certain purpose to a different one. For example it is not allowed to use travel visas for medical or study purposes, he said, noting that the UK authorities have the right to deport violators of visa and immigration laws.
The travelers must have round-trip tickets, he said, unveiling that the law enforces have recently deported a number of Kuwaitis upon their arrival for having one-way tickets.
With regard to hand luggage restrictions at the airports, Al-Mudhaf urged travelers to make sure that their electronic devices are charged at the airports.
If the devices don’t switch on when requested, travelers won’t be allowed to bring it onto the aircraft, he laid it bare.
Al-Mudhaf urged nationals to take care of their passports and not to hand them to anybody except for law enforcers.
He also stressed that they have to immediately report to police in case of passport theft or loss.
The Kuwaiti diplomat said that travelers should not to go out with huge amounts of money or valuable items. He advised nationals to keep passports, airline tickets, and value items at hotel or bank lockboxes.
He underlined that all financial transactions or currency exchange should be conducted through reputable and accredited banks and currency exchange firms.
Al-Mudhaf stated that property renting should be made through an accredited firm or through a lawyer to avoid any legal troubles.
He disclosed that Kuwaitis tourists could use their own cars in the Britain but they have to abide the relevant regulations in this regard.
As for accompanying nannies or housemaids, Al-Mudhaf said that they must have valid Kuwaiti visas for at least one year and to enter UK accompanied by their sponsors or employers.
He advised Kuwaiti shoppers to keep the receipts, particularly when they buy expensive world-brand items, for the purpose of goods change or return.
Medicine prescriptions should also be kept because they may be needed at the airport, he said.
Al-Mudhaf urged all nationals to avoid infamous places or areas which witness riot or violent acts. He asked them not to deal with unknown persons or to respond to their provocations that usually aim to cause chaos for the sake of theft.
He called on the Kuwaiti travelers not to hesitate to call the embassy’s 24-hour nationals service hotline (02075903400).
The Kuwaiti diplomat urged citizenry to confirm their return flight booking at least three days before the departure date.
As for Kuwaiti patients receiving state-funded treatment in the UK, Al-Mudhaf asked the accompanying person who receives the remittances and appropriations from the bank to be vigilant as a number of theft cases had been reported recently for people accompanying patients outside banks.
He underscored that the Kuwaiti health office in London should be notified at two weeks before the expiry of the patients and accompanying people’s visas.
In case of health emergency, the accompanying people have to take the patient to the nearest state hospital and to call the hotline 999.
He noted that the Kuwaiti health office has assigned a doctor who could be reached on phone No. (07825186776) to deal with emergencies that took place after the regular working hours or during official holidays.