Costing over Dh2,000 per person, Dubai is the dearest popular international city to celebrate New Year’s Eve, according to research by Travelex. 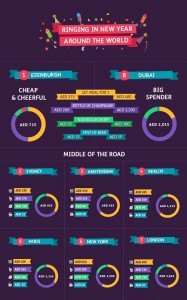 That sum will get you a set meal-for-one, a bottle of bubbles, nightclub entry and a pint of refreshment.

With a strong dirham, many Dubai expatriates may be considering visiting another city to see in 2016.

Partying in Sydney is considerably cheaper than last year because the rate is now 1 dirham = AU$3.72 (Travelex’s online rate). Compared to December 2014 the dirham is 15 per cent stronger against the Australian dollar, meaning those exchanging Dh5,000 today now pocket an extra AU$230.

The Hogmanay street party in Scotland’s capital, Edinburgh, may also attract those looking for a cheaper alternative, at almost a third of the price of Dubai (Dh715).