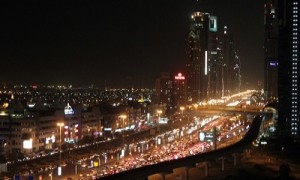 The Traffic Movement and the Handling of Operational Plans during Annual Events Team at the Roads and Transport Authority (RTA) in Dubai is fully prepared for managing the traffic during the eve of the New Year 2016. A comprehensive and strict plan has been put in place for managing the movement of vehicles and public buses, especially in the neighborhood of Burj Khalifa.

Accordingly, the Burj Khalifa Metro Station will be closed from 10.00 pm on Thursday 31st December, and the public will be directed to the Financial Center and the Business Bay stations where extra directional signage will be in place. The number of the metro riders during the festivities time (Thursday 31/12/2015) is expected to hover around 900 thousand riders, and on Friday 01/01/2016, the metro ridership is expected to be in the order of 480 thousand persons.

Dedicated lanes would be provided for buses and taxis, stated Bin Udai who called on motorists to avoid using the Financial Center Street and the Mohammed bin Rashid Boulevard after 08:00 pm on Thursday 31 Dec, adding that such streets will be reserved for traffic exiting the place and emergency cases only. Al Asayel Street stretching from Oud Metha to Burj Khalifa would be closed, as it would be reserved for RTA buses offering free shuttles to the public from Al Wasl Parking yard to the pick-up & drop-off point at Al Abraj Street at Burj Khalifa.

“There is a ready and approved plan for management traffic during the New Year’s Eve, and the Team would play a key role in creating ample room for vehicles to exit the place once the event is finished. In this regard, coordination has been made in the light of new developments for benefiting from streets in the surroundings,” added Maitha.

“The Booking and Dispatch Center at RTA Public Transport Agency would deploy sufficient number of taxis to serve the public during festivities in an operational rate exceeding 95% to ensure the integration of taxicabs with other transit modes and accordingly bring added happiness to those celebrating this global event,” added bin Udai.

In a related development, Bin Udai stated that the light signals control room of the area would be monitored around-the-clock to ensure smooth traffic movement as dictated by vehicular traffic and density in junctions and streets nearby the Business Bay. The directional signs (VMS) would guide the public to suitable alternative roads set in coordination with the Dubai Police in order to monitor the implementation of the plan and introduce any changes if needed.

She called on the public to use the metro and public transport rather than private vehicles, especially during the festivities hosted by Dubai such as the New Year’s eve.