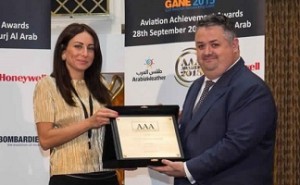 Qatar Executive, Qatar Airways’ corporate jet division, has been recognized at the annual Gulf Aviation Networking Event (GANE 2015) with an award for its outstanding growth since its foundation.
The annual Aviation Achievement Award recognizes players from commercial and business aviation as well as airports and aviation solution partners for their exceptional contributions to the region’s aviation industry.
The award was presented to Qatar Executive against the backdrop of the division’s major expansion across its entire service portfolio and operations, including the ground-breaking order for 30 Gulfstream aircraft in May, Qatar Airways said in a press release.
The first Gulfstream G650ER will join Qatar Executive’s fleet in the last quarter of this year and strengthen the company’s position as one of the premier private jet operators in the region and worldwide.
The order will triple Qatar Executive’s fleet and establish Qatar Airways’ business jet division as the largest Gulfstream operator in the Middle East.
“Being recognized for Qatar Executive’s ‘Outstanding Growth’ is a significant achievement and proud moment for the national airline’s corporate jet division,” Qatar Airways Group Chief Executive Akbar Al Baker said.
“Winning this award is a great honor and testament to the hard work which has been put into our corporate jet division, and we are looking forward to introducing our new Gulfstream G650ER into service as well as continuous service level enhancements for our most discerning customers,” he added.
Qatar Executive currently operates a long-range fleet of eight modern Bombardier aircraft including three Challenger 605s, four Global 5000s and a Global XRS with a two cabin configuration and a capacity for up to 13 passengers.