QATAR AIRWAYS TO RECEIVE ITS FIRST A380 BY EARLY JUNE 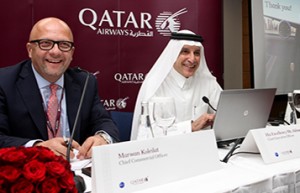 During a packed press conference at the Dubai International Convention & Exhibition Centre, Al Baker gave Middle East and international media an update on the newly opened Hamad International Airport and the airline’s highly anticipated arrival of its first Airbus A380-800 in early June, the first of 13 such aircraft on order.

The airline’s new A380 luxury First Class seats are a key feature on its exhibition stand at ATM this week providing travel professionals from around the world with an opportunity to sample the seats and amenities.

Featuring a tri-class configuration of seating in First, Business and Economy, over two decks, the A380 is the largest passenger jet in the world and will provide a superior traveller experience to the airline’s customers.

“Qatar Airways is making news yet again with the newly opened Hamad International Airport and the anticipated arrival of the airline’s first A380 early next month.

“This is indeed an exciting year and a new chapter for Qatar Airways as we will move our entire hub operations to Hamad International Airport on 27 May.

“We also eagerly await the delivery of the world’s largest passenger jet and have no doubts that our new A380s will play a key role in our strategic expansion plans, and will help expand the onboard capacity – in the full comfort and luxury that our passengers expect,” said Mr. Al Baker.

During ATM, the airline’s CEO introduced the A380’s new First Class seat to the Middle East for the first time. The product offers a seat pitch just over 2.2 meters long and can be converted into a fully flat bed. In addition, the seat unit, the widest in the industry, allows for access to a 26-inch screen with a variety of entertainment options. There is also a privacy screen, increased personal storage as well as the ability for two passengers to sit across from each other while dining.