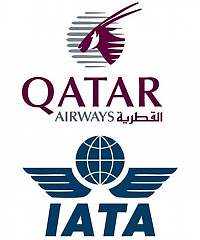 Qatar Airways will host the 70th International Air Transport Association (IATA) Annual General Meeting (AGM) and World Air Transport Summit, said the carrier in a press release on Sunday.
The event will be held in Doha from 1st to 3rd June 2014. This year’s event will be particularly significant as the aviation industry is celebrating 100 years since the first scheduled commercial flight.
Qatar Airways Chief Executive Officer (CEO) Akbar Al Baker, said: “Qatar Airways is a strong supporter of IATA, and as such is looking in keen anticipation to hosting this event. This year’s AGM is the first to take place in the Middle East since Amman, Jordan, in 1997, and this is only the fourth time that the AGM has been held in the region.
“As guests and aviation leaders descend on Doha this June, we look forward to them witnessing the new infrastructural developments in our country, especially the new Hamad International Airport, the world’s newest airport gateway,” Al-Baker added.
In January 1914 the first commercial passenger flight took place in Florida. it was a 23-minute journey across the bay separating Tampa and St. Petersburg, Florida. That event marked the birth of the global airline industry and in a co-incidence, Qatar Airways is launching a direct flight from Doha to Miami in Florida next month, 100 years later and just six days after the IATA AGM..
Qatar Airways has seen rapid growth in just 17 years of operation, to the point where today it is flying a modern fleet of 134 aircraft to 138 key business and leisure destinations across Europe, the Middle East, Africa, Asia Pacific, North America and South America.
Over the next few months, the carrier’s network will grow further with Al Hofuf, Saudi Arabia (May 15), Istanbul Sabiha Gokcen Airport, Turkey (May 22, 2014), Edinburgh, Scotland (May 28, 2014), Miami, USA (June 10, 2014), Haneda, Japan (June 18, 2014), Dallas/Fort Worth, USA (July 1, 2014) and Djibouti (July 27, 2014).