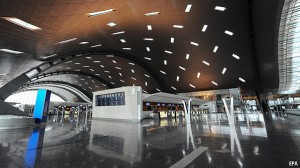 Qatar’s new Hamad International Airport started partial operations Wednesday with the landing of the first flight on the state-of-the-art aerodrome.
HE Qatar’s Minister of Transport Jassim bin Saif bin Ahmad Al Sulaiti, HE Chairman of the Civil Aviation Authority and Chairman of the Steering Committee of Hamad International Airport Abdulaziz Al Nuaimi, members of the Steering Committee and a number of dignitaries were on board the Qatar Airways flight which landed on the eastern runway of the airport at 11:30 pm local time.
Ten airlines will start operations from the new terminal today onwards while rest of the carriers, including Qatar Airways, will move to the new airport at 9:00 am on May 27, 2014. The Steering Committee will hold a press conference later today to inform local and international media about the start of operations and the new airport’s future plans.