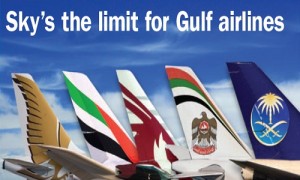 Development in the region’s dynamic aviation sector will once again be a major talking point at Arabian Travel Market (ATM) 2016, as Gulf airlines look to capitalize on their strategic location, connecting East and West.

It has been an extremely strong performance over the last 18 months for the region’s aviation sector with Gulf airlines in particular showing the strongest passenger growth in the world according to International Air Transport Association (IATA) statistics, following an 11.7% year-on-year rise in traffic to August 2015, which is now beginning to manifest itself at ATM.

“The amount of space that we dedicate to aviation has been steadily rising since 2012, which has grown almost 32% over the past four years to reach well in excess of 2,000 square metres. This figure doesn’t even include what we call ‘stand sharing companies’, where companies choose to participate by sharing stand space, for example, Air Arabia decided to participate at ATM 2015 with the Ras Al Khaimah Tourism Development Authority,” said Nadege Noblet-Segers, Exhibition Manager of Arabian Travel Market, which takes place at the Dubai International Convention & Exhibition Centre, on 25 – 28 April 2016.

Since June 2015 Emirates has announced improved frequencies and also new routes to Boston, Orlando, Chicago, Bali, Mashad (Iran), Bamako (Mali), as well as Panama City, the longest non-stop flight in the world in a westerly direction. Etihad Airways has opened up new routes to Edinburgh and Madrid and next year Qatar Airways will fly to Sydney, Los Angeles, Atlanta, and Boston.

“The low cost airlines are not being left behind either, flydubai now operates 110 routes and will carry 8.9 million passengers this year. Air Arabia now connects Casablanca with Montpellier (France) and Naples (Italy) and Marrakesh with Frankfurt. In addition the Sharjah-based carrier is now extending its reach to Urumqi in China,” added Noblet-Segers.

Other regional statistics support the bullish sentiment toward aviation growth forecasts, when demand and wealth dynamics are considered. According to the World Bank, the MENA region population is more than 331 million with an annual growth rate of 1.73% in 2013.

Recent YouGov data would also support those figures, which revealed that more than one-third of MENA residents (36%) are planning to increase their leisure travel over the next year, with 15% anticipating a big increase in outbound travel.

The same research also showed a similar trend for business travel with 33% of MENA-based passengers reportedly taking one or more short-haul leisure trips over the previous 12 months, out of which 10% made three or further trips by air.

“More could be done to generate additional air passengers, the open skies issue and GCC-wide visas for example are sure to be hot topics for discussion once again during the ATM 2016 aviation seminars,” added Noblet-Segers.

ATM 2016 will build on the success of this year’s edition with the announcement of an additional hall as Reed Travel Exhibitions looks to add to its record-breaking achievements earlier this year. ATM 2015 witnessed a year-on-year visitor attendance increase of 12% to over 26,000, with exhibiting companies increasing by 5% to 2,873. Business deals worth more than US$2.5 billion were signed over the four days.