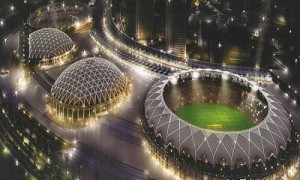 A UAE newspaper has said that Abu Dhabi has shown the way with its share of world class events like the Formula One Abu Dhabi Grand Prix and the jiu-jitsu world championship rounds.

“Lionel Messi landing here for a short visit to accept the Best Player of the Year prize during the Dubai Globe Soccer Awards night was the best way to sum up another grand year for the ‘Pearl’ of the Middle East in sports,” said Khaleej Times in an editorial on Wednesday.

“UAE sports sponsorships were virtually non-existent less than 10 years ago. The country has now emerged as the biggest single investor in the sponsorship of European teams.

“Abu Dhabi Holdings spent US$330 million for a 90 percent share in Manchester City in 2008. That investment has been rewarded on the pitch with two Premier League titles, an FA Cup and a League Cup. Manchester City are backed by Etihad, while Real Madrid, Arsenal and AC Milan and PSG all carry the Emirates logo on their shirts.

“Superstars arriving here only have words of praise for the country’s advanced sports infrastructure. The fields and lineups for major sporting events in Abu Dhabi, Dubai and Sharjah continue to grow every season.

“The variety of sports events is mind boggling and the Dubai Sports Council leads with 350 events held this year even as grass-root level events have not been ignored. During the warm months, massive halls at the Dubai World Trade Centre are converted into one big stage for full fledged inter-club tournaments.

“The capital has shown the way with its share of world class events like the Formula One Abu Dhabi Grand Prix and the jiu-jitsu world championship rounds. Sharjah hosts cricket matches and a round of powerboating, while Dubai has the world’s richest horse race in its portfolio apart from tennis and golf.

“A sporting culture is gaining ground with big games being played here and high profile visits from the stars, while sponsorships spread the UAE brand globally. Good reasons why the country cannot be ignored as a sports powerhouse,” concluded the daily.