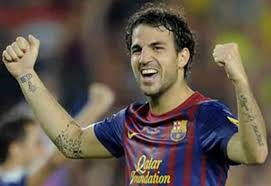 and dashed top English Premier League (EPL) club Manchester United hopes of signing him to bolster their mid-field. Speaking to Malaysian news agency Bernama here, ahead of his team’s friendly match against the hosts on Saturday, Fabregas said, “I’m happy to stay at this club (Barcelona) although many people speculate that I will return to the English Premier League.”

Manchester United’s new chief David Moyes had made Fabregas his top midfield target, after reportedly missing out on Thiago Alcantara, and has seen two bids rejected by the Catalans.

The 26-year-old Spanish international is part of FB Barcelona squad currently on its last leg of the Asian Tour.

Meanwhile, Malaysia’s head coach K. Rajagobal has challenged his players to raise their performance and show their mettle against the Spanish club in the encounter tomorrow at the National Stadium in Bukit Jalil.

The 57-year-old coach said playing against one of the best teams on the planet was a rare opportunity for any national team or club.

“I want the players to take this opportunity to give their full commitment while playing against one of the best football clubs in the world. Playing against this team (FC Barcelona) is also part of our learning process and, most importantly, the local fans will get to be entertained by Saturday’s match,” Rajagobal said.

Argentine maestro Lionel Messi, voted FIFA World Best Player four times, hopes to be at his best despite suffering from fatigue due to the hectic travelling schedule with Barca.

Messi said although his players suffered from fatigue due to the travelling involved in the club’s Asian Tour, he was happy to see improvement in their performance.

The four-time FIFA World Best Player also said he was happy to train under new manager Gerardo Martino who replaced Tito Vilanova who quit the team to undergo treatment for cancer.